Ax Battler (アックス=バトラー Akkusu Batorā), also known as Tarik in some English games, is one of the main characters in the Golden Axe franchise, a barbarian that fights with a long sword.

Ax has dark hair and wears blue trunks and boots, as well as silver cuffs and necklace.

A few years before the events of the game, Ax Battler was calmly returning home after a good hunt, thinking how happy his mother will be. After his father died when he was young, it was very important for him to make his mother happy. When he arrives at the entrance of the village, he finds no sign of life, only a heap of corpses. Unsettled with the sight, he rushes home to see if his mother is safe, but finds her lying in a pool of blood. He mourns her death and swears to avenge her. The barbarian later discovers that Death Adder's forces were responsible for the destruction of his hometown.

Ax Battler is one of the three heroes to stand up against Death Adder and his forces. Ax Battler, along with Tyris Flare and Gilius Thunderhead, pushed back the forces of Death Adder, retrieved the Golden Axe, and renewed peace across Yuria.

Ax Battler, along with Tyris and Gilius, join forces to fight against Dark Guld and his minions to retrieve the Golden Axe and restore peace across Yuria once more.

Tarik the Axe Battler mets Tyris while travelling and they have a short talk about what is happening in the lands. Tarik hails from the Battler clan of the Firewood People, a nation within the frozen Northlands. His skill with Axe and Blade are legendary. Refusing to fight Death Adder, his purpose remains unknown. He later appears in the ending, the prideful warrior reluctantly letting Tyris and Gilius help him deal with the problems in the northern lands.

Ax Battler is the most balanced of the three warriors, having great strength (although not as strong as Gilius) and magical power (which Tyris is better at). He uses a long sword as weapon.

In the PlayStation 2 version, Ax Battler has three magic levels instead of four.

Ax Battler's abilities are basically the same from the previous game, but he uses Wind Magic (風の魔法) instead.

Ax Battler can use Earth (2), Thunder (4) and Fire (8) magic, each hitting all enemies visible and requiring an amount of Magic Vases to be used. Earth only causes 1 point of damage, the same amount of the sword. Thunder causes 2 points of damage, and Fire causes 4, being his strongest attack in the game. He can also learn Special Attack skills during his quest by visiting Training Houses in towns. The Special Attacks he can learn are:

Ax Battler appears in the Archie Comics crossover Worlds Unite, where his dimension is attacked by Mavericks and he defeats Gareth. After the battle, Ax Battler, Tyris, and Gilius join forces with heroes from other dimensions to stop Sigma. 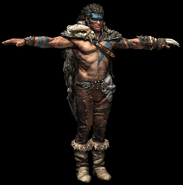