Death Adder (デス＝アダー Desu=Adā, also written as Death=Adder and Death-Adder) is the main antagonist of the Golden Axe series, having multiple appearances throughout the games. A fearsome descendent of the evil giants that survived the battle against the gods many years ago, the serpentine Death Adder seeks nothing more than to conquer the world and rule as emperor.

He allegedly appears as the central antagonist of the first game (meaning the secondary antagonist who hides the main).

Many years before the game, Death Adder tricked the humans and took the Golden Axe, using its power and his army to conquer the land and starting an era of darkness, pillaging and destroying several places without mercy.

Six years after he destroyed the Firewood Kingdom, Death Adder imprisoned the royal family from the Southwood Kingdom. Upon learning of this, three heroes, all having lost someone close to them through Death Adder years ago, decided to stand against Death Adder's evil and vowed to put a stop to his reign of tyranny. They were Ax Battler the barbarian; whose mother had been killed by Death Adder's soldiers, Tyris Flare the amazon; who had lost both parents to the evil lord's legions, and Gilius Thunderhead the dwarf; whose only brother was slain by Death Adder's minions.

Together, they travelled the lands of Yuria, ridding the once peaceful land of Death Adder's influence and freeing the people from the slavery of his men. When they had reached the Southwood Castle, they infiltrated its walls and confronted the giant in battle. Death Adder is shown to be a snake able to call other snakes to form a human body. After his defeat, Death Adder perishes, putting an end to his reign of terror.

The way Death Adder dies varies between versions. In the arcade, he is knocked on the floor and releases his axe, which falls on him. In the PC Engine version, his body crumbles and the player's character kills the Death Adder snake. In the PlayStation 2 version his body starts releasing a green energy and he disappears, apparently succumbing due to the excess of power he used from the Golden Axe.

Years later, when the land of Yuria was at peace again, Death Adder re-emerged from the darkness, along with his castle, spreading chaos and destruction across the land once more. This time, Death Adder wanted revenge on the warriors and the land. Four new heroes stood against Death Adder's forces and fought their way up to the evil giant's castle. When the heroes arrived at the castle, they infiltrated the defences by flying on the back of a dragon and landed upon to head of Death Adder's vast castle statue.

Death Adder appears with the Golden Axe and a large shield with a dragon head. The shield can release fireballs, flames, or lightning from its mouth, and will swallow Magic Pots if the player attempts to use magic. After taking several hits, the shield breaks and Death Adder can be hit with magic, but he will also use his own magic, charging energy and then punching the ground to unleash a wide shockwave. 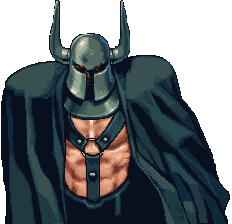 Death Adder was believed dead after the battle with Gilius Thunderhead many years ago, yet rose again to stalk the land. Twice since then he has "died" only to return again from the other side. It is widely believed by the people that he is not a man, but an evil spirit.

Rumors that he will fight for the Golden Axe are causing panic throughout the lands. Should Death Adder gain the Golden Axe, the continent will face an age of horror and despair.

He is one of the ten playable characters, and is always fought as the tenth opponent in the story, in his Death Palace. If his shield takes too much damage (128 HP, like all fighters), it will break, reducing his defense and making him unable to use the move Dragon Breath.

Death Adder has a cameo appearance in the game's opening.

Death Adder is the main antagonist, but his only appearance is hidden in darkness in the ending. Death Adder Jr. is a common enemy in the game, and is often mistaken with Death Adder due to his name being shortened in the English version.

Death=Adder is the final boss, attacking Tyris with a large sword. When his health is low, he will pull the Golden Axe from Tyris and use it against her. After his defeat, Tyris recovers the Golden Axe and Death=Adder removes his armor, changing into a snake-like form. Death=Adder - Titan Form attacks with fireballs from the mouth and tail, and slithers around. Although the battle is difficult, Tyris manages to kill him.

In the Archie Comics crossover Worlds Unite, Death Adder is mentioned by Gilius. Although he doesn't make an appearance in the story, Death Adder is present in one of the variant covers from Sonic the Hedgehog #275. 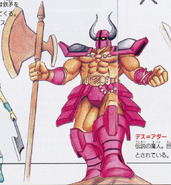 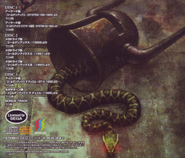 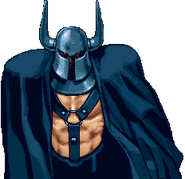 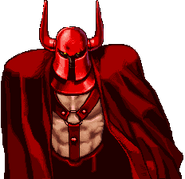 Cameo in the opening of Golden Axe III 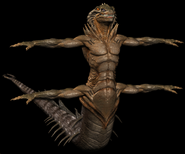 Cameo in the cover of Sonic the Hedgehog #275
Community content is available under CC-BY-SA unless otherwise noted.
Advertisement