Gilius Thunderhead (ギリウス＝サンダーヘッド Giriusu=Sandāheddo, also written as Gilius=Thunderhead, Gilius-Thunderhead, and Gillius) is one of the main characters in the Golden Axe franchise, a white haired, bearded dwarf who is one of the original warriors to rise up against Death Adder. He wears a green tunic, brown leather boots and a green topped Norse-style horned helmet. His weapon of choice is his silver coloured broad axe.

Gilius Thunderhead and his young brother and only relative (in the games), "Garī", were among the soldiers from the Firewood Kingdom fighting against Death Adder's army. When Death Adder attacked, Gilius was knocked out during the battle. Gilius was the only soldier that survived the attack. When he recovered consciousness, his dead brother was lying on Gilius, apparently protecting him from the massacre.

Six years later, Gilius learns that Death Adder invaded the Southwood Kingdom and captured the King and Princess. Seeking revenge and justice, Gilius Thunderhead took up arms against Death Adder and his dark forces. Along with Tyris Flare and Ax Battler, Gilius pushed back the forces of Death Adder, retrieved the Golden Axe, and renewed peace across the land.

Gilius Thunderhead takes up arms again, along with Tyris Flare and Ax Battler, to fight the evil giant Dark Guld, retrieve the Golden Axe and restore peace across the land once more.

Many years have passed, and Tyris Flare and Ax Battler have passed away (possibly due to old age). Gilius Thunderhead decided that the Golden Axe should be returned to the gods, so that it would not fall into the hands of evil again.

With the Golden Axe in hand, Gilius bade farewell to everyone and set sail from the mainland on a voyage to the ends of the world. After some time sailing, a fierce storm suddenly appeared and brought wave after wave upon Gilius's ship, causing massive damage and throwing all crew members off the ship; including Gilius himself. Gilius couldn't hold onto the Golden Axe, and as he lost consciousness he could hear a loud, evil laughter.

Gilius washed up on the kingdom of Splash Hill in East Land, and stayed to recover his wounds. Some time later, when he regained the ability to walk, he set out to search for the Golden Axe, but what he saw was a dark world caught in a battle of hatred, tainted with blood and flames. Though once a peaceful kingdom, the mysterious Damned Hellstrike suddenly appeared with an army of demons and overrun the kingdom, imprisoning and enslaving all who lived there. The king's whereabouts were unknown and the princess was imprisoned in the castle.

Gilius knew that must be the work of the Golden Axe. Too old to take to battle once more, and also injured, Gilius sent out a call to the bravest of heroes to take up arms and fight against the evil king and retrieve the Golden Axe.

Gilius briefly appeared during the introduction and does not fight directly, instead, he acts as mentor and sage to the new warriors that have taken up arms against Damned Hellstrike. He has also swapped his axe for a walking stick.

Taking place after the first Golden Axe (the story of Golden Axe II and III are separated from this game), Gilius Thunderhead returns to the battlefield to take up arms against Death Adder. Gilius sits upon the shoulders of Goah the giant, apparently lending his axe to the giant. His only action during the game is using Magic Pots in Goah's place.

After the final showdown with Death Adder on the back of a dragon, the giant attempts to destroy the warriors by casting a powerful magic. Gilius strikes Death Adder with Goah's axe, interrupting him and causing them both to fall from the dragon's back. They are engulfed in the resulting explosion of Death Adder's magic, apparently killing both.

Gillius Rockhead, one of the fighters in this game, is a great-grandson of Gilius Thunderhead.

Although not named Gilius, the dwarf Gillian appears to be a misnamed/renamed Gilius as he resembles him and has a role similar to Ax Battler and Tyris. Gillian is from Numibi, a dwarf village in the mountains that was destroyed by Death Adder. He managed to escape, but is wounded and hides in a cave in Lake Whale to recover and avoid Death Adder's monsters.

The player can find Gillian's cave by chopping the trees in Lake Whale with the Battle Axe. Gillian asks for a Golden Apple to heal his wounds, and if the player helps him, he will give the Thunder Magic Scroll as thanks. After the player obtains four of the nine crystals, Gillian will upgrade the Thunder Magic if revisited, and has faith that the warrior can defeat Death Adder.

The proud and ancient Gilius Thunderhead was entrusted by the Axirian Sisterhood with their piece of the Golden Axe. During a ceremony, Death Adder's minions attack The Island of Axir and kill all members of the Axirian Sisterhood, except for Tyris. Alone, the dwarf warrior was unable to stop the Great Dragon's capture and is injured. When Gilius sees Tyris in the Diyar Highlands, he is surprised to see her alive and gives her the pieces of the Golden Axe he collected, trusting her to repair it and defeat Death Adder.

Gilius is an unlockable playable character. When he activates his special, he uses Thunder Magic and his racket turns into the Golden Axe. While active, Gilius will launch the ball upwards, which will fall into the other side alongside four lightnings. If an opponent touches a lightning, the target will be temporarily stunned, giving Gilius the chance to make a point.

Gilius Thunderhead's primary form of attack is his broad axe. He can swing his axe swiftly and deal fast, heavy blows and string together combos. Gilius is also able to use his superior strength to lift and throw enemies, perform full body tackles and jump large distances then strike with his axe. He is also able to use magic, but as a dwarf, he dislikes to rely on it, preferring to fight with weapons.

During Death Adder's first rise to power in Golden Axe, Gilius used Thunder/Lightning Magic, controlling the element of thunder to cause lightning bolts to strike the battlefield. His magics are:

Gilius's abilities are basically the same from Golden Axe, but he uses Rock Magic (岩の魔法) instead of electricity, controlling the element of earth to command boulder falls and landslides on the battlefield.

Some time after Dark Guld's defeat, Gilius, Tyris and Ax Battler are attacked and captured by the minions of Sorcerer Blackspell, who plans to use one of them in a spell to revive Dark Guld. Choosing Tyris, he orders the Lizard Woman Ridia to kill Gilius and Ax. Due to his small size, Gilius's feet was not chained, and he kicked Ridia, making her accidentally cut one of Ax's chains. Ax knocks down Ridia and takes her keys to free themselves. After helping Tyris in her escape, Ax is captured, but Gilius and Tyris free him and use their magic to defeat Dark Guld.

While traveling to return the Golden Axe to the king of Yuria, the trio decided to rest in Gilius's home, the dwarfish stronghold of Rockguard. To their surprise, it is under attack by priests and snakes. During the battle, Ax Battler disappears, Tyris is injured, and Gilius's father is poisoned. After defeating the enemies, Gilius and Tyris learn of the current events and Gilius offers to go underground to save the dwarf queen. Taking the Golden Axe to rescue the queen of the dwarves from the priests of the serpent god. His sister goes with him, and they succeed in the task. Unfortunately, his father was not able to resist and died.

Gilius appears in the Archie Comics crossover Worlds Unite, where his dimension is attacked by Mavericks and he defeats Gareth's lion. After learning about the current situation, he joins forces with heroes from other dimensions to face Sigma. 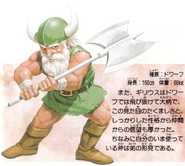 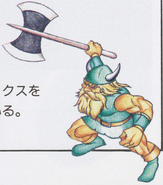 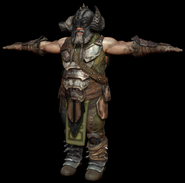 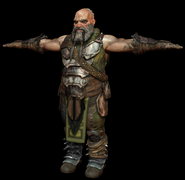 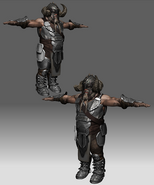 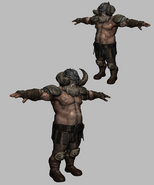 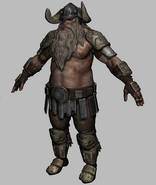 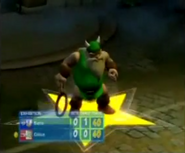 His special in Sega Superstars Tennis 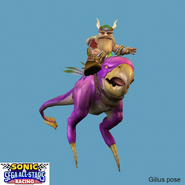 Gilius as a weapons merchant in Shining in the Darkness

Gilius and his father in Sonic the Comic

Gilius and his sister in Sonic the Comic

Community content is available under CC-BY-SA unless otherwise noted.
Advertisement