Golden Axe: The Duel (ゴールデンアックス・ザ・デュエル) is a fighting game first released as a coin-operated arcade (Sega ST-V) game in Japan in 1994. It was later ported to the Sega Saturn system, first to Japan in September 1995, then to North America in June 1996. It was the third arcade game in the Golden Axe series.

80 years after Golden Axe: The Revenge of Death Adder, the people had forgotten the tragic events of the past and had rebuilt their lives.

However, now the terror begins once again. The legendary Golden Axe was rediscovered, and its power appears to have grown over the years. Now, numerous fighters from across the land are attempting to obtain this artifact, which is said to be able to grant its owner anything his heart desires.

After dueling the other characters, the player must face a physical representation of the Golden Axe's powers: a giant, golden-armored warrior. It is believed to be the spirit of a sacred god dwelling inside the artifact. 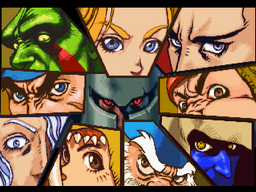 The game received mostly mixed reviews from critics, many of whom complained about the lack of originality and convoluted special moves. Sega Saturn Magazine gave it 85%, but Electronic Gaming Monthly gave it 6.125/10, while Maximum scored it 3/5. 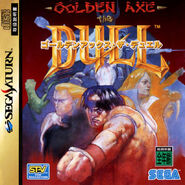 Japanese Sega Saturn cover
Add a photo to this gallery

Retrieved from "https://goldenaxe.fandom.com/wiki/Golden_Axe:_The_Duel?oldid=4838"
Community content is available under CC-BY-SA unless otherwise noted.