Golden Axe Wiki
Register
Don't have an account?
Sign In
Advertisement
in: Games, Golden Axe: The Revenge of Death Adder

Golden Axe: The Revenge of Death Adder (ゴールデンアックス デスアダーの復讐) in an arcade game released by Sega in 1992. It was the first 32-bit Golden Axe game, and the second to be released in the arcade.

Only Gilius Thunderhead makes a return from the original games, riding the back of new character Goah the giant. The rest of the cast is all new and includes Sternblade the barbarian, Dora the female Centaur, and Little Trix, a young lad who carries a pitch fork. The main enemy is once again Death Adder.

Some time after Death Adder's defeat, he returns and obtains the Golden Axe, enslaving the land and constructing a giant castle that looks like him.

The four heroes begin their quest to defeat him, taking routes through the lands that are partially the player's choice. After fighting through several levels, they finally reach Death Adder's castle. They fight section by section, until they reach the castle's "head." There they face Death Adder himself, armed with a fire-breathing shield and the Golden Axe. After destroying his shield, the heroes are able to defeat him. While getting away on their dragon, Death Adder attacks again, apparently not yet defeated. After his final defeat, Death Adder prepares to deliver one final blow; at this point Gilius leaps onto Death Adder's head, striking him in the skull with his axe. Both Death Adder and Gilius tumble off the dragon, exploding in midair. The Golden Axe in their control, the remaining heroes continue riding away on their dragon.

In a final closing animation (that was most likely just done for fun), all four heroes (Gilius included!) appear in a tavern, drinking and dancing to music. Death Adder and in-game enemies appear as well, joining in on the party. The words "See you next game!" appear.

The game is an overall improvement on the original with better sound, graphics, and gameplay. As well as introducing multiple paths to the franchise, the magic aspect was adjusted. Though still found in the classic Golden Axe pots, the magic spells did not increase in power with the number of pots collected but required a set number to work. This was the only Golden Axe game in which one of the magic attacks was not offensive as Little Trix grew apple trees with fruit that replenished health.

Though the game was released third and not fourth, it is possibly chronologically the final of the four "main games." At the game's end, Death Adder rises one more time. Gilius sacrifices his life to finally end Adder's. In direct contradiction to the game's end, during the end cinematic Gilius is shown in a bar with every other character, and a banner appears saying, "See you Next Game!"

After its release on the arcade, the game was never ported to a home console. However, an Arcade 1up compilation featuring the game, along with the original Golden Axe, Altered Beast, Shinobi, and Wrestle War was released in 2020. It is also featured on the compilation of games on the Sega Astro Mini console.

Reviews for the game have remained largely positive. Electronic Gaming Monthly gave it 80%, and on GameSpot the game has a user rating of 7.6/10. IGN has a community rating of 8/10. Sega Zone gave it 60%. 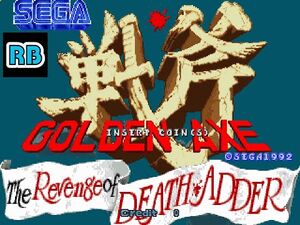