Golden Axe II (ゴールデンアックスII) is the sequel of Golden Axe, released for Sega Genesis/Mega Drive in 1991. It was later ported for the Wii Virtual Console in 2007, PC (via Steam) in 2010, and iOS in 2011. It saw limited arcade exposure in the MegaPlay series of arcade machines and is part of the Sonic's Ultimate Genesis Collection released for Xbox 360 and PlayStation 3.

Three years have passed since the battle against the evil giant Death Adder. The evil lord of darkness who was sealed a long time ago, Dark Guld, returned and attempts to lead the world into chaos again. He started by taking the legendary Golden Axe to use its power and his army to bring destruction to the land. Gilius Thunderhead, Ax Battler, and Tyris Flare join forces once again to save the world from this new threat.

The game featured new magic for each of the heroes with the trademark magic pots from the first game replaced by spell books this time around.

Many video game magazine editors of the time expressed that the game was very likely rushed into production to give Sega another popular title to enable the Mega Drive/Genesis to compete with its new rival, the Super Nintendo. In most respects this sequel was essentially the same as the original, though it had new sprites for enemy characters and new levels. Many players were disappointed with this title as they were expecting more than a rehash of the first title. However, the title had the virtue of not straying too far from a successful formula and was still quite popular upon its release.

Japanese cover
Add a photo to this gallery 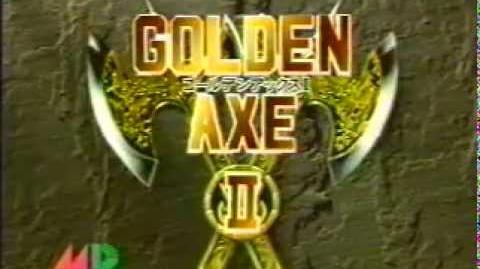 Retrieved from "https://goldenaxe.fandom.com/wiki/Golden_Axe_II?oldid=5022"
Community content is available under CC-BY-SA unless otherwise noted.