Yuria is a location mentioned on English manuals from Golden Axe and in the game Golden Axe: Beast Rider as the land the series takes place. Yuria isn't named in Japan, the name being used only in English sources.

Many years before the game, the Firewood (ファイヤーウッド) kingdom was destroyed by Death Adder. During the game he attacks the Southwood (サウスウッド) kingdom, capturing the royal family. Three warriors, Ax Battler, Tyris Flare and Gilius Thunderhead, upon learning of this, depart from the wilderness of the Old Firewood Kingdom to stop the villain and avenge their family and friends that were killed by Death Adder's forces. From the wilderness, they go to the Turtle Village, then the Fiend's Path, and finally to the Royal Castle, where they defeat Death Adder and rescue the royal family. In some versions the heroes also go to the castle's Dungeon to face Death Bringer.

A few years after Death Adder's defeat, Dark Guld appears to conquer the land in Golden Axe II. The three warriors go into battle again to deal with this new menace, starting by taking care of his forces in a Ravaged Village. The trio then pass by Ancient Ruins, the Enemy's Headquarters, the Dragon's Throat cave, the Castle Gate, and inside Dark Guld's Castle.

The game takes place on the East Land. 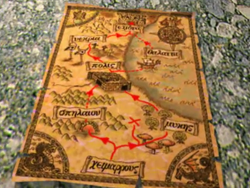 Death Adder returns and causes chaos to the land.

In the Island of Axir, the Axirian Sisterhood have summoned the Great Dragon in a final bid to stop the growing threat of Death Adder. However, Death Adder sent his minions to capture the dragon and destroy the sisterhood, killing all members except for Tyris Flare.

Diyar was the last of the Yurian Kingdoms to stand against Death Adder, until the Firstborn Twin brought his armies to bear. When Tyris passes by the Diyar Highlands, Gilius gives her the Golden Axe.

She then goes in other places and beats Death Adder. 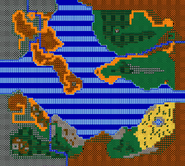 Map from Golden Axe: The Duel
Add a photo to this gallery
Retrieved from "https://goldenaxe.fandom.com/wiki/Yuria?oldid=4667"
Community content is available under CC-BY-SA unless otherwise noted.